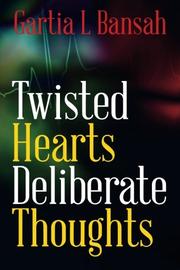 In Bansah’s debut thriller, the abduction of two small-town children sets two investigators on the trail of a complicated conspiracy.

In a sketchily imagined near-future America, most interstate law has broken down, and a political strongman, Pentium Soloman, has instituted a Southern Region Defense Team. Its commander, Justice Tobiah Black, assisted by his best friend (and near-doppelganger), Rayford Rule, is called to the small town of WhiteFlower to investigate the disappearance of the Roan twins from St. Sullivan hospital. Justice Black is a seasoned, world-weary officer (“Every day the thought of quitting tapped his shoulders and teased, ‘Don't you want a life?’ ”); when he questions a surly young suspect, he laconically remembers “a mutt he once owned that went mad and had to be put down.” The children’s pediatrician, Gracie McIntosh, is a passionate firebrand, professional but fiercely stubborn. She’s devastated by the twins’ disappearance (“They were only babies,” she tells the officers. “They didn't have a chance to make an imprint on this miserable Earth”), but she’s adamant that she had nothing to do with it. Bansah’s narrative shifts back and forth between WhiteFlower and Ghana as the plot expands to introduce the book’s true villains—a twisted, psychotic brother-and-sister duo with plans to poison WhiteFlower’s groundwater with ricin and cadmium. The author ably portrays the personalities of both good and bad guys, and despite the fact that Bansah’s grasp of English idiom often falters (“The last I saw you, you looked like roughness rolled over twice”), her dialogue is emphatically believable. The book evokes the action in Ghana far more convincingly than in WhiteFlower, but in both locations, the author keeps the plot moving and the characters engaging. Fans of Michael Crichton’s and Michael Palmer’s medical thrillers will find much to entertain them.