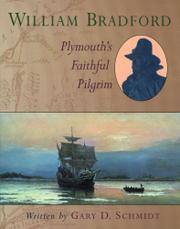 paper 0-8028-5148-8 Paying tribute to both the political skills and the deep spirituality of Plymouth Colony’s guiding light, Schmidt (Sin Eater, 1996) paints a warm and cohesive picture of William Bradford’s role in that colony’s foundation and growth. Orphaned since childhood, Bradford joined the Puritan movement as a teenager, and gave up a fairly prosperous life to accompany local Separatists in their move to the Netherlands. Readers will get a clear sense of the courage it took to make that break, to defy both monarch and established church, and to later board a barely seaworthy ship for a dangerous voyage to an unknown land. Under Bradford’s wise stewardship Plymouth went from a struggling settlement to a flourishing town, surviving deadly winters, suspicious local natives, successive waves of poorly supplied immigrants, fire, rival colonies competing for land and trade, even an earthquake. The author sifts Bradford’s writings for clues to his character—noting such ambiguities as his near- silence at his first wife’s sudden death—and points out Plymouth’s enduring legacy to this country. (illustrations, not seen, notes, bibliography) (Biography. 11-15)