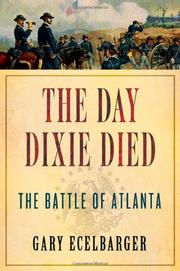 The Battle of Atlanta

Civil War historian Ecelbarger (The Great Comeback: How Abraham Lincoln Beat the Odds to Win the 1860 Republican Nomination, 2008, etc.) closely examines the crucial battle of the campaign for Atlanta, the war’s most decisive engagement.

Antietam, Vicksburg, Gettysburg—each marked an important turning point in the Civil War, but none spelled the end for the South as did Atlanta. Militarily, the daylong battle on July 22, 1864, the bloodiest day of the war’s last ten months, assured the eventual capture of the South’s most important rail and commercial center. Politically, Atlanta’s surrender guaranteed Lincoln’s reelection, eliminating any chance that the war-weary North would allow the Confederacy to go its own way or return to the Union with slavery in place. Military buffs will appreciate Ecelbarger’s meticulous recounting of the battle—he breaks the action into increments as narrow as 15 minutes—the ferocity of which accounted for more than 10,000 casualties and kept one out of five participants from answering the next day’s roll call. The author’s careful reconstruction demonstrates how, with four hours of daylight remaining, the outcome could easily have turned into a Union disaster. Readers less consumed with precisely how the battle unfolded will likely prefer the numerous, sharp appraisals of the officers and soldiers. Conspicuous for the South was the aggressive John Bell Hood, whose command featured the likes of hard-drinking and hard-fighting Benjamin Cheatham, oft-wounded William “Shot Pouch” Walker, young “Fighting Joe” Wheeler, experienced Patrick Cleburne and William Hardee, who led the flanking maneuver critical to Hood’s designs. Gen. James McPherson, a protégé of Grant and Sherman, led the Northern army and died in the battle, but the slack was taken up by the inspirational John Logan, the tenacious Mortimer Leggett and Medal of Honor winners Manning Force and John Sprague. Their battlefield heroics enabled a triumphant Sherman to telegraph his president, two months before the election Lincoln believed lost, “Atlanta is ours, and fairly won.”

With efficiency and élan, Ecelbarger gives an often overlooked battle its due.