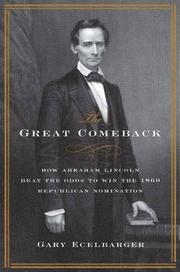 Civil War historian Ecelbarger (Three Days in the Shenandoah: Stonewall Jackson at Front Royal and Winchester, 2008, etc.) looks at the remarkable campaign that propelled Honest Abe to the presidency.

Having been defeated twice in four years for his bid to the U.S. Senate—against Stephen A. Douglas—Illinois attorney Lincoln was in a low point of his career by late 1858. His improbable rise to win the Republican Party’s nomination for president by 1860—against the great favorite, New York Senator William Seward—makes a compelling story, which is skillfully delineated by Ecelbarger. The future president’s debates with Douglas, a proponent of the controversial Kansas-Nebraska Act of 1854, made Lincoln nationally famous, and proved to be the catalyst for his success. Committed friends like Jesse Fell and Judge David Davis kept his name on the back burner, concealing his true ambition, while in the name of party unity Lincoln modified his anti-slavery views, distancing himself from the abolitionists, whose stance he believed spelled political suicide. He also had to backpedal from his controversial “House Divided” speech of the previous year (“A house divided against itself cannot stand”), which seemed to presage civil war. The build-up to the nomination required Lincoln to travel outside the state of Illinois to court the press, as Ecelbarger amply demonstrates. The author creates a sympathetic, humane portrait of this ungainly character who did not like to discuss his humble upbringing and spoke instead about the demoralizing influence of slavery in clear, earnest terms. At the Republican convention in Chicago in May 1860, the committed but underfinanced Lincoln team confronted the Seward juggernaut and carried the day. Ecelbarger’s informed, readable account will appeal to both scholars and amateur historians.

A pertinent history lesson, especially in this election year.