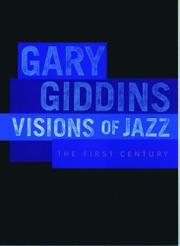 Giddins, a longtime Village Voice contributor and one of our most skillful jazz critics (Faces in the Crowd, 1992, etc.), offers a monumental work of ambition, an attempt to encapsulate a hundred years of jazz history in 79 essays on the music’s great creators. Actually, more properly, this is about the progenitors of jazz, benchmark figures and some idiosyncratic characters who helped make it a unique art form. Readers will look in vain for some key musicians—no Sidney Bechet, Ben Webster, Woody Herman, Albert Ayler here. What they will find, however, should more than amply reward: a canny celebration of jazz as a hotbed of intransigent individuality, of creation-on-the-fly. On the threshold of its second century, jazz faces a crisis of historical interpretation. As Giddins writes, “Jazz has been taken up by the academy at a time when only the academy can keep track of it.” Giddins has made no attempt to smooth out the complicated wrinkles of the schools, trends, and cycles of which jazz history seems to be made. But, while he brings an unerring critical intelligence to his analyses of the music and a formidable grasp of music theory and practice, his writing has grown so compressed and aphoristic through the years that it now has the burnished weightiness of, say, film critic Manny Farber’s work. Giddins has become a master of the lightning insight, the unexpected connection (his use of literary analogies is particularly apt). Visions raises some quibbles., and it is not a book to be read straight through, not surprising, given its length and intensity. Occasionally Giddins assumes too much knowledge of his readers. And a discography would help a lot. But this is an important book, one that any serious student of jazz will want to own. Deserves a place on the jazz bookshelf alongside the best of Martin Williams and Francis Davis, and you can’t get much better than that. (11 illustrations)