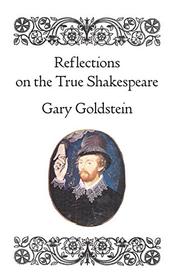 REFLECTIONS ON THE TRUE SHAKESPEARE

An erudite, persuasive debut study that makes a valuable contribution to the longtime debate over who authored William Shakespeare’s plays.

Goldstein makes it clear from the opening that he is an Oxfordian—not, as he points out, “a graduate of Oxford University” but rather “an independent scholar who holds that Shakespeare was written by Edward de Vere, 17th Earl of Oxford (1550-1604).” The author has significant experience in his field, as he conducted more than 25 years of research; established a peer-reviewed journal, The Elizabethan Review; and co-edited Brief Chronicles, a literary journal with a focus on authorship studies. This book collects essays and reviews that he published in British and American literary journals. At the beginning, he provides a short, precise biography of de Vere and indicates why he and other Oxfordians believe that he’s a good fit as the possible author of the plays attributed to Shakespeare. Goldstein takes time to brief those who may be unfamiliar with this scholarly debate, making it accessible to relative newcomers. That’s not to say that his work is oversimplified, however; on the contrary, Goldstein provides detailed literary exegesis regarding the Shakespeare plays’ allegorical language and the presence and significance of the Essex dialect in them (de Vere was born in Essex). The intricacies of his argument are engaging, right down to the pronunciation of “Shylock” in The Merchant of Venice: “If Shakespeare was born and raised in the county of Essex, he would have pronounced the name as Shillock.” Although Goldstein is aware that many people vehemently defend their own views on the authorship of Shakespeare’s works, his own approach is admirable in that it’s quietly and intelligently assertive. He doesn’t attempt to bludgeon readers with his arguments; rather, he accumulates evidence and then modestly allows readers to decide for themselves. His study would have benefited from a strong concluding statement, but its open-endedness could be interpreted as a call to arms, as he actively requests readers to contact him and contribute to the debate.