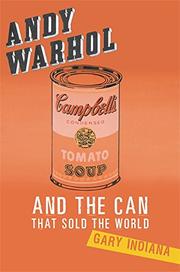 ANDY WARHOL AND THE CAN THAT SOLD THE WORLD

Prolific cultural critic Indiana (The Shanghai Gesture, 2009, etc.) presents a concise yet highly illuminating treatise on the paintings’ significance. During a period saturated with the art of the Abstract Expressionist movement, Warhol’s entrée to the scene, both in terms of his banal subject matter and ambiguous sexuality, was met with mixed reviews. His Soup Cans, lacking the technique and complexity that marked the success of big names like Pollock or de Kooning, were initially dismissed by critics as boring. But soon the importance of Warhol’s artistic commentary gained traction, and his symbolic aesthetic was recognized as ’60s America reflected in high art. By echoing his obsession with media and pop culture in his images, Warhol tapped into the psyche of a public whose intrigue with art was stymied by Abstract Expressionism’s very abstractness. Indiana writes that “Warhol’s cans demonstrate that modern reality is mediated through the symbolic,” and that his paintings are a “projection of everything that can be bought and sold, the practical but impermanent symbols that sustain us.” Warhol’s meteoric rise to fame brought with it a completely innovative approach to the art scene, culminating in The Factory, his infamous studio that was constantly filled with oddballs, ingénues, actors and artists. The Factory’s silkscreen production line was in itself a projection of commercial culture, and yet each painting was unique. Warhol’s genius lay in recognizing how to select the right subjects at the right time—from Marilyn to Mao—in order to elicit cultural self-recognition from viewers. It was only fitting that Campbell’s soup, a product Warhol was forced to eat for lunch each day of his childhood, was the first image he chose to immortalize.