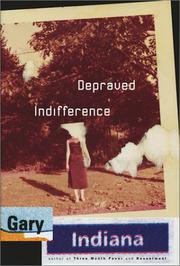 With trademark exuberance and venom, Indiana (Three-Month Fever, 1999, etc) here spins a dizzying tale of Evangeline (or is it Evelyn? Ellen? Eve?) and her son Devin, modern-day grifters with a peculiar genius for knowing exactly how to use people. Their “fanatical obdurate bravura” allows them to balance on the ragged edge of disaster with barely a wobble—other than Evangeline being jailed for four years or so for slave trafficking. Moving on the fringes of the American West—Arizona, Hawaii—they seek their marks, ranging from Evangeline's husband Warren (whose illegal activities and confidence schemes pale in comparison to those of his spouse) to her somewhat loyal employees to drifters whose usefulness Evangeline can size up in a split second. Indiana begins with chapters titled for characters touched by Evangeline—Varlene, the crank-addicted accountant; Otis, the sad-sack arsonist who can’t understand how he ended up torching the Slotes’ Hawaiian estate—but the story circles in ever more tightly as we approach Evvy’s final project. Bald descriptions of Evangeline's incestuous acts with Devin are disturbing, but when the second half of the story introduces Baby Claymore, their latest victim, an extravagantly imagined millionairess (a former Esther Williams “aquabat” determined to create a foundation celebrating the seamstress’s craft), the plot takes on the appeal of an elegantly executed train wreck.

Indiana has plenty of room to send up what he sees as the strangely empty landscape of American culture, while his dashing prose sweeps the reader along to a climax that is no less compelling for being inevitable.