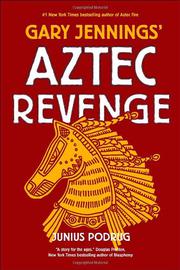 The latest installment in the late author's Aztec adventure franchise.

After Jennings, who published the first Aztec novel in 1980, passed away in 1999, his series was continued by other authors. Podrug (Feathered Serpent 2012, 2010, etc.) is the co-author of the last four installments, with author Robert Gleason. Here, Podrug details the adventures of Juan the Lépero, who at the novel’s outset, is about to be hanged for horse thievery in 16th-century Mexico City. An extended flashback, making up the bulk of the book, follows Juan on a series of adventures as he progresses from a street beggar to a skilled horseman and thief. Blamed for an accidental death, he becomes a fugitive, falls in with a gang of “bandidos” and later poses as a wealthy Spaniard visiting Mexico City—who attends a costume party dressed as a beggar. Still later, he works to save a friend from being tortured to death by Inquisitors. Though Podrug aims for a rousing adventure tale, much of it misses the mark. The story drifts aimlessly, bouncing artlessly between first- and third-person points of view. Though Podrug apparently put effort into research, his digressive history lessons tend to drag things down. Character development is sketchy at best, with female characters mostly portrayed as sex objects (with one woman likened to “a wild horse that needs to be broken”). Juan’s exclamatory narration, featuring shouts of “Ayyo!” every few pages, will also wear on some readers, as will some of his uglier sentiments (“The mere thought of throttling the bitch roused my blood and gave my spirits a lift”).

An unfocused and uninspired adventure tale.