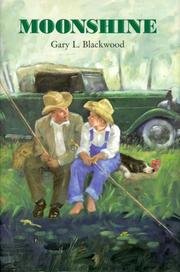 Blackwood goes from Elizabethan England (Shakespeare Stealer, not reviewed, 1998) to a Depression-Era Ozarks setting for this poker-faced tale of a self-reliant but naive teenager. Although he and his mother are dirt poor and he doesn’t remember his father, Thad is an optimist; he has a girl, a loyal bluetick hound, and a good if risky source of income, selling corn liquor for Dayman, a sour, one-armed recluse with a hidden still. He begins to get a glimmer of other lives and possibilities when Harlan James comes to town, claiming to be a land scout for tobacco growers. Harlan is well-dressed, a free spender, and free with his time, too; he allows Thad to use his fancy tackle to land a huge catfish, teaches him how to use a rifle, and even loans him clothes for a date. Blackwood knits characters together with threads of “moonshine”—not liquor, but a steady diet of stories, jokes, yarns, and outright lies’so that the story becomes a study in layers and varieties of honesty. Thad’s feeling of betrayal is sharp but brief when he finds out that Harlan is a revenue agent, stalking Dayman’s still, which literally explodes in his face. Blackwood drops plenty of hints that both Harlan and Dayman are more than they seem, so alert readers are always ahead of Thad, which adds drama; the twin revelations that Dayman is Thad’s father and that Harlan’s friendliness wasn’t all moonshine close this backwoods bildungsroman on a high note. (Fiction. 11-13)