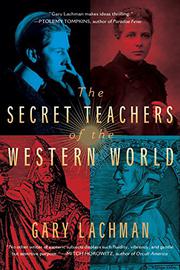 THE SECRET TEACHERS OF THE WESTERN WORLD

A writer on esoteric and occult subjects looks at the people who influenced Western thought through theories of a “living, intelligent universe through which [individuals] could participate through…[the] imagination.”

In his latest book, Lachman (Aleister Crowley: Magick, Rock and Roll, and the Wickedest Man in the World, 2014, etc.) uncovers the esoteric or “secret” knowledge that underlies Western philosophy. He suggests that two bodies of knowledge coexist together like the left and right sides of the brain: traditional Western philosophies focus on “ ‘facts’ that can be grasped by the senses and proven by measurement,” whereas esoteric ones focus on knowledge of “the invisible and intangible.” The author examines the work of such pre-Socratic thinkers as Thales and Pythagoras and sets their ideas in the context of Greek, Egyptian, Roman, and early Christian history. These lesser-known philosophers, along with more celebrated ones like Plato, were all to some degree concerned with explorations of gnosis, the inner experience of spirituality that could potentially lead everyone to “share equally in the divine.” In the centuries to follow, medieval Christian fraternities like the Cathars and Rosicrucians turned to Gnosticism to challenge established Christian dogmas. As Renaissance Europeans turned away from God and toward science to explain reality, esotericism took on the role of the “unconscious” mind in a world growing increasingly dependent on rational explanation. Yet as Lachman shows, esoteric knowledge persisted, especially in the face of social, political, and economic uncertainty, and could be found in the work of poets as diverse as Dante, Goethe, and Blake. In the modern era, esotericism re-emerged as part of so-called New Age knowledge and practices involving, for example, tarot and astrology. The author’s conclusion—that the time has come for a synthesis of traditional and esoteric forms of knowledge—is fascinating. But where the author is most successful is in how he manages to make basic concepts in esoteric philosophies and history lively as well as readable.