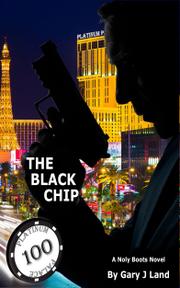 Ex-PI Noly Boots must race against time and circumstances to rescue his girlfriend and her daughter from an assortment of Vegas gamblers, lowlifes and psychos.

Like any ex-PI worth his salt, Noel Butowski—better known as Noly Boots—carries scars both emotional and physical. He was in a coma for three months after being shot by a double-crossing client, and the $20 million payout for that case left the client’s lunatic heirs with a yen for revenge. He’s kinda-sorta broken up with his girlfriend, Sarah, a casino dealer with a preteen daughter, Kacy, because commitment could mean collateral. But when Sarah’s brother, Joey, a senior programmer at the Platinum Palace Casino, conspires with his banker girlfriend to skim close to $3 million from the casino’s proceeds, Joey ends up dead. Sarah and Kacy are kidnapped in an attempt by Joey’s mob creditor to regain the MacGuffin—a black casino chip full of computer files. And that makes Noly mad. Debut novelist Land has a background in screenwriting and, for better and worse in this Chandler-esque thriller, it shows. Noly’s former clients, the van Leesles, bear more than a passing resemblance to the decadent Sternwoods of The Big Sleep, as do the twists and turns of the plot, with Sarah and Kacy passed off from one set of bad guys to another as each group tries to outwit steely, determined Noly. The tight plot is well-paced and the action is tense, if bloody. There are sadistic enforcers, whores with hearts of gold, good friends and bad betrayers, hostile FBI agents, exasperated cops, and in 11-year-old Kacy, one tough cookie. Yet the novel sometimes turns clunky in the actual descriptions of action, places and people, which sometimes read like background information rather than words to be read for their own pleasure. The strongest, most gripping relationship in the novel is between Noly and Kacy, the tough-as-nails PI and his kick-ass kid partner.

A welcome foray into the Vegas PI genre, hopefully the first of many.