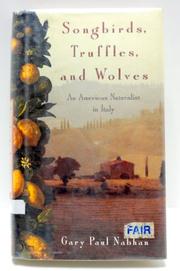 An American Naturalist in Italy

A journey from Florence to Assisi in the steps of St. Francis proves as much a spiritual quest as an eclectic scientific inquiry for enthnobotanist Nabhan (Enduring Seeds, 1989). While recovering from a painful divorce, Nabhan, who's part Lebanese, decided to walk the two hundred miles between Florence and Assisi ``in part to ponder my Mediterranean roots, and in part to learn of the land of my saint, San Francisco.'' Before he set off, he made a brief visit to Genoa, home of Christopher Columbus, where, in a local market, he found prickly pears, native to the Americas but now at home in the Old World: This sort of cross- fertilization of plants and seeds—as well as of cultures—is one of the author's subtexts here. Another is the need for ``rough country land where we can be truant and not have to pay to get in or be inspected on the way out.'' Nabhan discovered that little of such wilderness is left in Italy: The wolves have gone; the forests where chestnuts or truffles grow are planned; and even the ancient oaks at St. Francis's shrine, protected as artifacts rather than as living organisms, are dying from benign attention. Civilization is always close by, providing a mix of old and new: rock music and the waltz at an Umbrian corn festival (leading Nabhan to a brief history of corn in Italy, where it once caused pellagra among the peasants); farmers cultivating ancient native crops alongside New World imports like tomatoes and sunflowers; the tasting of the season's first truffles, dug up by dogs rather than by the traditional pigs. Throughout, Nabhan relates his experiences with a beguiling candor that's spoiled by only a few obvious thoughts and insights about human relationships. An enjoyable mix of information and opinion from a writer whose delight in nature is always wise and thoughtful, never sentimental or smug.