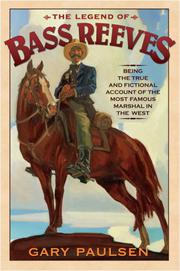 THE LEGEND OF BASS REEVES

Paulsen takes the few facts known about this remarkable man and shapes them into a compelling, even elegant narrative—brief sections of historical fact between longer, fictionalized tales of the boy Bass Reeves was and the man he became. He begins by debunking the so-called “heroes” Wyatt Earp, Billy the Kid and Wild Bill Hickok, among others, who were disreputable at best and wicked at worst. He spins out Bass’s story: a boy born a slave, kept with his mother and owned by a gambler and a drunkard. He lets readers see how Bass learns the land, and how to hunt and care for himself and his animals. He shows why Bass had to run—hiding in the Indian Territory, leaving his mother behind—and live with the Creek for 22 years. At age 51, honorable and successful, he became a marshal, bringing in hundreds of criminals and never drawing his gun first. Paulsen’s telling is rich in both vivid and gory historical detail, from scalping, branding and burying to hunting, butchering and animal care. Completely captivating—begs to be made into a movie. (Historical fiction/nonfiction. 10-14)