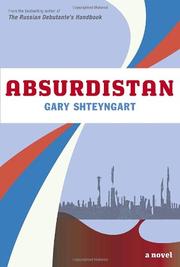 This time, Shteyngart’s not-so-heroic hero is 30-year-old, 325-pound Misha Vainberg, son of a St. Petersburg gangster who’s just been offed on the Palace Bridge. Misha would like to go back to the U.S., where he spent the 1990s happily attending college and sampling New York’s multicultural delights. But now, in 2001, he can’t get an American visa—there’s that small matter of the Oklahoma businessman whom beloved papa iced. His only way out is a trip to the Republic of Absurdistan, where the millions he negotiated as a settlement with Papa’s killer (another mobster) can buy him a Belgian passport and a ticket back to Western materialism. So Misha heads for Absurdistan, a chaotic Caucasian region populated by two warring ethnic groups plus plenty of visiting employees of Halliburton subsidiary Kellogg, Brown and Root: It seems there’s oil somewhere in them thar hills. This sticky situation degenerates into civil war as nasty as it is ludicrous. (The sardonic chapter entitled “Why the Sevo and Svanï Don’t Get Along” says it all about the stupidity of ancient grudges.) Shteyngart’s eye for the comic horrors of modern life remains acute: Prostitutes at the Absurdistan Hyatt offer discounts for “Golly Burton,” and the local alleged reformers are appalled by the death of a protestor at the G8 summit “just as our struggle for democracy was gaining some market share in the global media.” Ugly ethnic conflict, however, makes a dicier foundation for humor than the wide-open Eastern Europe of Shteyngart’s first novel (referred to here as The Russian Arriviste’s Hand Job). He now seems to be aiming for a tougher statement here with the brutal murder of a local democrat, but his characters are too grotesque to prompt much sympathy. And yet again, an author relies on the fact that 9/11 is approaching to pump up his climax’s suspense; at least Shteyngart spares us an actual rehash.