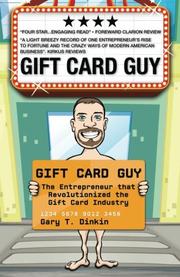 A gift-card entrepreneur recounts his rise, dispensing life lessons and business tips along the way.

Before he “revolutionized the gift card industry” Dinkin had a rough childhood growing up near Toronto, where anti-Semitic bullies tormented him. But, as he writes in this debut memoir, he’s thankful for the experience; his pent-up anger, he says, motivated him to try harder and eventually become a successful businessman. After he and his family moved to Coral Springs, Fla., he worked in unsatisfying sales jobs before forming his own company, SmartClixx, in the booming gift-card industry. Dinkin, like many successful entrepreneurs, offers plenty of advice, often emphatically (“Life Lesson #1: SOMETIMES YOU JUST NEED A LUCKY BREAK!”; “Life Lesson #14: EVERY IDEA STARTS WITH A SPARK”). Although the tips aren’t particularly profound, they do offer readers a dollop of common sense—a scarce commodity in this or any age. Dinkin also shares his insights into the sales game, describing tactics like the “Ben Franklin” close, in which the salesman stresses positives over negatives, and the “reduce to the ridiculous” close, in which a product’s cost is divided over time. This primer on the ins and outs of the gift-card business includes examples of his company’s successes and failures, but its humor sets it apart; at one point, for example, a confused elderly woman calls the author to complain, thinking she’s somehow entitled to free gift cards, and Dinkin also includes his amusing interactions with a wacky, deceitful CEO with a Napoleonic complex. It’s clear in these pages that Dinkin believes he’s fulfilled his goal of success; for example, when he and his second wife drive behind a BMW with a bumper sticker saying “Life Is Good,” they chime in together, “But better for us!”

A light, breezy record of one entrepreneur’s rise to fortune and the crazy ways of modern American business.