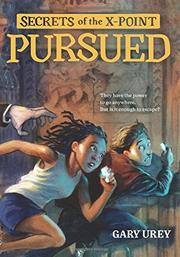 With a background in theater, Urey presents an action-packed tale that keeps its protagonists one step ahead of the criminals who want their high-tech transporters.

Axel and Daisha are more than just friends; they saw their parents murdered and have been on the run from the killer for over a year. Their parents invented the GeoPort, a device that allows them to instantly travel anywhere in the world, as long as they know the latitude and longitude. This discovery will revolutionize society, and whoever owns the technology can own the future. Pursued from one place to the next by evil henchmen, Axel and Daisha have to rely on their intelligence and each other to stay one step ahead while searching for a solution. While it’s refreshing to see two characters from diverse backgrounds (she’s black, with Jamaican and Kenyan heritage, while he’s white) interacting with respect and affection for each other, it would have been more interesting if they had more diversity in their characters. Likewise, it is unfortunate that the villain goes by the nickname Dr. Stain, due to a facial birthmark. Dialogue is too often clunky and expository, including a cringe-inducingly painful scene in which Lucy calmly explains her dreadlocks to an ignorant white boy who says her hair looks unwashed.

Still, Urey writes a solid adventure, with engaging protagonists, a neat gimmick, and a cliffhanger ending; here’s hoping the sequel irons out the bumps