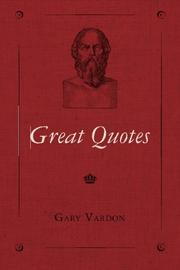 Great quotes and other passages are examined in historical and contemporary context.

Vardon’s slim text includes quotations from both prominent male historical figures and those who are, perhaps, slightly less well-known—Shakespeare, Nietzsche, Virgil and MacArthur, but also H.W. Beecher, Viscount Morley and Leo Burnett. The format is narrative, an arrangement unlike established reference sources such as Bartlett’s. Vardon’s approach is to present a quote and then provide “pithy commentary” for a “life altering read.” The author readily acknowledges that the book is “hardly the most comprehensive work” (its 20+ pages make it more like a booklet), but the work’s significance is still elusive. Is Vardon being self-deprecating with his so-called pithy commentary, or is he more serious, as when he states that the reader will be informed and inspired? The author’s opinions on issues such as welfare, feminism, war, capitalism and Nelson Mandela are fairly clear, so perhaps the book’s aim is to state opinions on contemporary issues and use the quotes as a backdrop. The delivery of the quotes and the real-life examples that illustrate them is problematic in several ways. There’s no apparent arrangement regarding subject, quoted figure, chronology, etc. Indeed, dissimilar quotes are included in the same paragraph. One such paragraph speaks of medicine, then quickly diverts to character. Another paragraph has several passages on self-destruction, then awkwardly switches to passages on language. There are also errors in syntax, including the displeasing redundancy of telling the reader what he’s just been told (e.g., “No work of quotations would be complete without quoting the great Nietzsche, and so I’ll quote Nietzsche”). The commentary that follows each quote is often mundane and even bizarrely neutral. Several comments simply assert, “So true. So true.” Sometimes the commentary is far too literal, especially for subjects so potentially and deeply philosophical. It seems a more thorough examination of all of these quotes is in order, one that includes exploring the nature of the quote, context, author’s meaning and various interpretations. No author credentials are given, but Vardon maintains that he is a student of history. The work could be improved with the simple addition of page numbers and an index.  A confusing, dissatisfying assemblage.