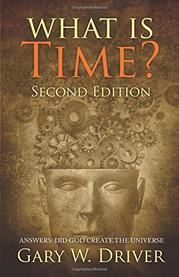 Answers: Did God Create The Universe

An eager inquiry into how time works, invoking Christian theology to braid together diverse strands of theoretical science, including cosmology, evolutionary biology and quantum mechanics.

Predicated on the reasoning that God’s influence is unavoidable, the author’s theory on the origin of time winds back to when God created the universe and, with it, “universal time.” (Humans, on the other hand, define “relative time” with clocks, calendars, histories and timelines.) Driver describes the three states of time (past, present and future) and connects faith to the nature of time, observing that humans rely on the supposition that the future will happen in a certain way. “The expected future is based upon collective information on the aging process of many who have gone before us,” he says. “These are life expectations due to time.” Driver delves into astrophysics and illustrates some working theories with memorable metaphors. To describe how cosmologists have observed the expansion of the universe, he explains that the universe is like a curtain, its unfolding accelerating so that it expands faster than the speed of light; the hand pulling the curtain, according to Driver, is God. Even further, Driver argues that the Big Bang theory, the operating assumption most astrophysicists use for the creation of the universe, relies on a supernatural force that defies the laws of physics, which, in Driver’s mind, makes it as equally plausible an explanation as a divine creator forming the universe. Driver uses this explanation to set up a theory that God uses science to reveal his ways to humans, one discovery at a time. One of his pivotal points describes God as an intelligent creator, setting forth the material for the creation of the universe and the laws that correspond to how it will behave and then letting the universe develop on its own. He points to evidence supporting evolution as the workings of a divine creator rather than a theory drawn from natural observations: “Darwin, in his limited theology, did not understand that nature is another name for God.” To prove God’s presence in creation, Driver delineates biblical evidence for later scientific discoveries. Yet the argument’s reasoning gets murky when taken to its logical extremes. For Driver, at the beginning and end of time, there exist two realms—spiritual and temporal—and God’s omnipotent governing of the universe is greater than time itself. But the conversational tone treats scientific theory with broad sweeps of generalization, as with his explanation for quantum physics: “Subatomic particles that make up the atom are broken down to lower elementary particles….According to the Scripture, the universe is all made of that which is not seen, elementary particles.” Often switching to the collective “we,” Driver attempts to speak for humanity in reasoning that only Christianity provides a comprehensive explanation for the universe’s existence—a notion with which some readers might disagree.

A faith-based examination that tries to square Genesis with astrophysics, with mixed results.