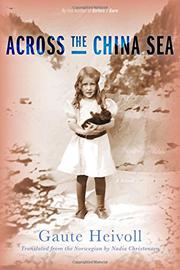 ACROSS THE CHINA SEA

It is gone now, disappeared somewhere along the way, the orange crate that crossed the China Sea on a freighter and wound up in an asylum in Norway. Recalls the narrator of events of half a century past, “Papa had found the crate in the attic above the men’s unit, along with old sedan chairs, straitjacket beds, and other paraphernalia from the past.” Our narrator slept in the crate as a baby; in a dream, his dead sister floats in it across the water, “holding white carnations,” and now it is gone, as are all the years gone by. Heivoll (Before I Burn, 2014) takes a Proustian view of the passage of time mixed with a solemnity befitting Ingmar Bergman, though he writes economically and with characters of a kind that do not often figure in storytelling: the mentally disabled, eight of whom are the charges of the narrator’s parents, churchly people with great reservoirs of empathy. Tracing this history to the last days of the Nazi occupation of Norway, Heivoll revisits tiny, rare moments of happiness (“I shivered and splashed with my hands, water sprayed up around us; sunbeams glistened in the drops and we laughed and laughed, and there was nothing but our laughter to be heard”), moments that produce nothing but wistfulness in those who partake in recalling them. His characters have a tragic grace, such as one, a promising poet whose mother burned his manuscript, another a voracious reader and gifted singer; all are fully fleshed, if not suited to the world, as when two sisters, having inherited a small sum, fail to comprehend how a bank account works. This is a story built on vignettes and small episodes; not much happens, but the brush strokes quickly make an elegant portrait.

Humane and lovely; reminiscent of Paul Harding’s Tinkers in its sympathetic understanding of mental disability and the power of memory.