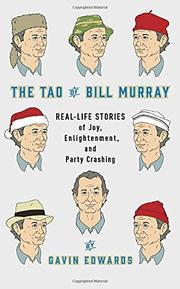 THE TAO OF BILL MURRAY

A personal philosophy based on Bill Murray’s well-publicized high jinks, pranks, and exploits.

There are countless urban legends about Murray, including stories of him crashing karaoke rooms, a kickball game, and a couple’s engagement photos. (All true.) There are also stories of Murray putting his hands over the eyes of unsuspecting strangers while saying “Guess who?” only for him to end the brief encounter with the rejoinder, “No one will ever believe you.” (Also true.) Based on innumerable tales like these and others, notwithstanding his career as one of the most beloved actors of his generation, Murray has carefully crafted a reputation for himself as our culturally appointed jester-in-chief. However, there is a somewhat serious philosophical foundation to Murray’s antics. As author and journalist Edwards (Last Night at the Viper Room: River Phoenix and the Hollywood He Left Behind, 2013, etc.) explains in his funny, affectionate portrait, Murray’s seemingly nonchalant attitude and inability to take anything seriously is rooted in his sincere desire to make the most of life. Through 10 principles outlined by the author, the underlying tenet to Murray’s “philosophy” reveals itself to be a kind of existentialist/Zen mashup that preaches a heightened awareness of the present. The key to Murray’s philosophy is that it is not self-serving. Though he has become known for his carefree antics almost as much as for his acting roles, he does them out of earnest playfulness. Murray is not always the genial clown, as many collaborators have witnessed his attitude turn abrasive and acerbic. Edwards skillfully weaves together many well-known and entirely new anecdotes from throughout Murray’s career that capture him at the height of his power. Murray is an endless delight, and his knack for bons mots and non sequiturs will keep readers laughing before revealing an unexpectedly poignant vision for happiness. The author also provides a rundown of Murray’s major films for reference.

A fun and revealing look behind the charm and mythos of Bill Murray that will only strengthen his legend.