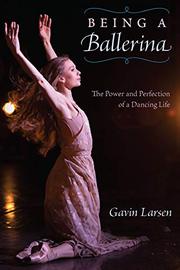 The Power and Perfection of a Dancing Life

Former ballerina Larsen recounts her career as a professional dancer from childhood training through retirement in her debut memoir.

The author draws on an 18-year career dancing with companies such as the Oregon Ballet Theatre and Suzanne Farrell Ballet in this book, which chronicles her journey toward becoming a principal dancer. In loosely chronological essays and recollections, she begins at the New York School of Ballet as a shy 8-year-old beginner holding her own after accidentally wandering into an advanced class: “you kept up so well, and you’ll catch up to everyone else quickly,” said the teacher. From there, the author describes her development, sometimes in first-person vignettes, other times in third-person narratives that evoke the storybook qualities of the ballets she eventually performed. Anecdotes include accounts of a debut performance in which Larsen had to learn an entirely new role five hours before curtain; a dance partner’s overconfidence resulting in a broken rib; and a performance executed amid a priceless art collection. In thoughtful and approachable prose, she shares stories of artistic growth, professional setbacks, injuries, and triumphs, always highlighting the intensity of her relationship with dance: “The word ‘dancing’ implies playfulness, a carefree spirit. The paradox of classical ballet is that in order to display that quality to her audience, the dancer has to move within a strict set of physical rules that are anything but careless.…Our only safety nets are our bodies, training, and courage.” Larsen also never shies away from the brutal physicality of her craft, describing in meticulous detail the ways that a ballerina must manipulate her body and the toll that such dedication can take. Her candor demystifies her profession, whether she’s describing pre-show breakdowns, the slog of auditioning, or how she protected her joints and feet. Still, Larsen also takes special care to celebrate the beauty and power of her art form. Overall, this is a lovely debut that’s relatable, engaging, and unafraid to show vulnerability.