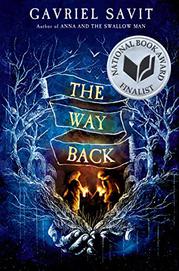 A Jewish boy and girl journey to the Far Country on the other side of the cemetery seeking to find that which they lost.

The story begins in a shtetl called Tupik, where a boy named Yehuda Leib and a girl named Bluma each have unexpected encounters with Death, setting them both on separate journeys through the cemetery on the edge of the village and into the Far Country, seeking the House of Death to reclaim what they lost. On their way, they pass through the town of Zubinsk, where the holy Rebbe’s granddaughter is about to be married in a highly anticipated wedding that draws not only Hasidim and visitors from all over, but also all manner of demons and spirits seeking an audience with the revered Rebbe. Bluma’s and Yehuda Leib’s winding paths cross until they finally band together to defeat their mutual foe with the help of some unlikely allies they meet along the way. Though their cleverness, grit, and dastardly alliances may get them far in the Far Country, they may not ultimately be enough to defeat Death itself. Lyrical and fantastic, this richly layered yarn is liberally sprinkled with bits of Yiddish and a wry, sparkling humor that balances its darker tendencies with sympathy and warmth.

Steeped in the rich traditions of ghost stories and Jewish folklore, this remarkable feat of storytelling is sure to delight.