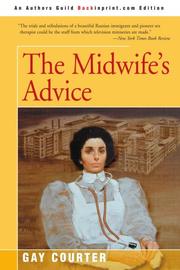 In The Midwife (1981), Hannah Blau Sokolow, Jewish-Russian midwife, delivered babies in Russia, in America, on the high seas, and detoured into advice on sexual matters. Now established as a midwife at Bellevue Hospital in 1913 Manhattan, Hannah, married to Trotskyite Laser and mother of two, will blossom into a full-fledged sex therapist. One of the first problems tackled by Hannah, encountering a wretched girl-producing patient, is why (as the patient claims) Orthodox Jews seem to produce an inordinate number of boys. Hannah researches both religion and science and produces results (Courter documents this unusual research in her ""Author's Note""). Meanwhile, as Hannah is monitoring birthings, other problems catch her interest: frigid women, impotent men, the nature of sexuality (she felt that, in spite of Dr. Freud, Adam came from Eve and not vice versa), lack of sexual impulses, and even the woes of a cross-dresser. But while Hannah is Dr. Ruth-ing, home problems impinge. Laser is off to Russia with Trotsky (he'll eventually return, disillusioned); there are battles to be fought for women's rights and legalization of birth-control information; and Hannah is into a hopeless love affair with a Bellevue physician. Throughout, we get glimpses of political celebrities of the time--Mabel Dodge, Margaret Sangar, radical Emma Goldman, and even Trotsky himself--grim and rude. Finally, Hannah will become famous as a sex therapist via a newspaper column and a book. Again, for the Belva Plain audience and for those enthralled by dramas centered on the nether end: a ham-handed treatment of delicate matters--which should fairly fly off the airport bookracks.