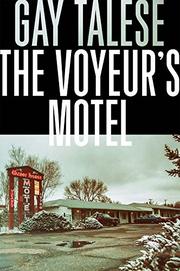 The disturbing private world of the sleaziest motel manager since Norman Bates.

The latest book by new journalism pioneer Talese (A Writer’s Life, 2006, etc.) is the story of the author's decadeslong correspondence with Colorado businessman Gerald Foos, an unashamed peeping Tom who spent years spying on clients at his roadside motel. From the attic over a room structurally fitted with a fake ceiling vent, Foos watched—and recorded, in a series of journals—the private lives of his guests, writing up (and often masturbating over) graphic accounts of the couplings of horny singles, adulterous professionals, threesomes, lesbians, widows with paid escorts, incestuous siblings, and men in costumes, among many others. He also saw lots of bored married couples watching TV. Foos views himself not just as a voyeur, but as a “pioneering sex researcher,” not unlike Kinsey, Masters, and Johnson—or perhaps Talese himself, whose 1980 Thy Neighbor’s Wife chronicled the sexual revolution from his perspective as both observer and participant. “Someone has to be delegated the responsibility to confront these tangible existences and tell other people about them,” Foos writes in one journal entry. “Herein is the intrinsic essence of the Voyeur.” Foos writes a functional, unfussy prose, which Talese both ably condenses and quotes at generous length. The character that emerges from this tightly woven narrative is oddly ambivalent. At some level, he's a little like Kyle MacLachlan in Blue Velvet, indulging this purely human desire to see what has always been hidden. But spying also fed Foos’ ego and allowed him to exert power over his guests, who became lab rats for both his obsessions and his power trips. Most disturbingly, he recalls how he once interceded in the life of a guest and inadvertently both caused and witnessed her murder. (The case, investigated at some length, remains shrouded in mystery.)