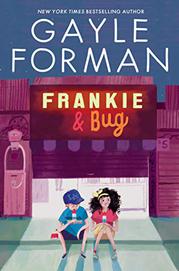 When Bug’s traditional summer routine is shaken up, her entire life changes.

It’s 1987, and 10-year-old Beatrice “Bug” Contreras has a plan: spend her summer months with her brother, Danny, on Venice Beach as she has for the past two years. But when 14-year-old Danny—who has matured into the name Daniel—wants more time to himself, Bug learns she will be instead hanging out with 11-year-old Frankie, the nephew of Phillip, her mother’s best friend and their upstairs neighbor. Frankie, who is visiting from Ohio, is trans at a time before this identity was well understood and has not been treated with kindness or acceptance by his parents. Frankie and Bug become fascinated with trying to solve the case of the Midnight Marauder, a serial killer who has been striking in the area. When Phillip is attacked, ending up in the hospital, their investigation swivels, and the titular characters uncover a few untold family tales. Bug and Daniel’s late father was a professor from El Salvador with Indigenous ancestry who spoke Nahuatl as well as Spanish and English. Biracial identity is explored in part through the differences in the siblings’ physical appearances: Their mother is implied to be White, and Daniel—who resembles their father more than Bug does—experiences more overt racism and dives into an exploration of his Salvadoran heritage. Readers interested in complex emotional development and relationships will appreciate each character's subtle nuances.