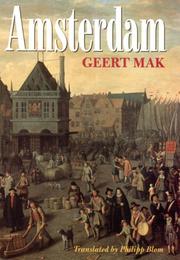 A Brief Life of the City

An affectionate, rollicking, and occasionally solemn ode to an 800-year-old city.

Dutch journalist Mak takes us on a guided tour of Amsterdam, from its humble beginnings as a settlement around a dam on the Amstel River in the late 12th century to the present. He celebrates the city’s heritage as a haven for independent-minded residents, from 16th-century Anabaptists to the Provos of the 1960s. The author excels when he lets real Asterdammers tell the story of their city. Judging from their surviving account books, for example, 15th-century merchant Symon Reyerszoon and his nephew maintained a thriving trade in ash, potassium, thread, hemp, wood, pitch, tar, rye, wheat, talcum, herring, cloth, wine, exotic fruit, and salt. The diary of a 16th-century Augustinian monk reveals the increasing isolation and terror felt by Catholics living in Amsterdam during the Protestant rise to power. The author convincingly argues that the city embodied the gospel of globalism—peace through prosperity—more than 400 years before the term was popularized. “The new Amsterdam that had emerged after the peaceful revolution of 1578 was dominated by a formula for success, which, until then, had been unknown: the pursuit of wealth in combination with a new conception of liberty. Money and freedom pushed aside . . . the old medieval combination of ‘honour’ and ‘heroism.’” This doesn’t prevent the author from criticizing the city and its inhabitants, however, and Mak offers a thoughtful and stirring account of Amsterdam during WWII—concluding that many Amsterdammers not only failed to help their Jewish neighbors, but willingly participated in the Final Solution. “The Germans never posted more than 60 officers in Amsterdam, even at the height of the persecution of the Jews. The rest was done by the Dutch. Of the total number of men deployed in the big raids, about half were ordinary Dutch policemen.”

Not a casual read, but an ideal tool for any serious student of history, art, architecture, European studies, or religion.