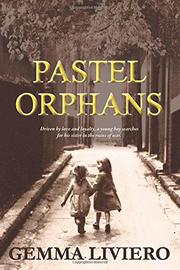 In Nazi-occupied Poland, a half-Jewish boy searches for his blonde, blue-eyed sister in Liviero’s debut novel.

At first, young Henrik isn’t very fond of his younger sister Greta, but his parents make him promise, in return for some special treats, to always look after her. When Poland later falls under the Nazi yoke, Henrik’s Jewish father must separate from the family; as a result, they’re defenseless when a Nazi officer kidnaps Greta. Henrik is horrified to learn of the Eindeutschung, or “Germanization,” program, in which fair-haired, blue-eyed children in occupied territories are abducted, assessed and trained for adoption by Germans. Those who don’t make the grade are killed or sent to concentration camps. Henrik, now a young, artistic teenager, is galvanized to keep his promise and rescue his sister. During his search, he hides out with resistance fighters and sympathetic Poles and meets a courageous young woman named Rebekah (who also narrates the story). Liviero writes a dramatic, heartfelt tale based on a little-known aspect of the Holocaust. Hundreds of thousands of children are estimated to have been kidnapped for the Eindeutschung program; for that reason, readers may find it strange that the novel gives Greta’s experience such short shrift, barely describing it in these pages. It’s also disappointing how easily Henrik finds needles in haystacks amid the chaos of war. That said, Liviero nicely portrays the uncertainties, tentative friendships and difficult choices of a fugitive, as well as the tenderness of new love. An emotional epilogue set in 1953 catches readers up on each character’s fate.

An absorbing account of loyalty and love in wartime, freshened by unusual historical events.

THE TRUE STORY OF HANSEL AND GRETEL
by Louise Murphy
Children