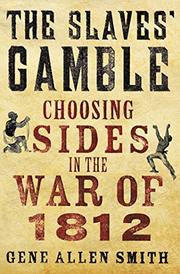 Smith (History/Texas Christian Univ.; Thomas ap Catesby Jones: Commodore of Manifest Destiny, 2000, etc.) explains the War of 1812 from the viewpoint of the slaves who served both sides in the hope of attaining their freedom.

There were also many free blacks who, for the most part, joined the American side in order to fortify their cities. Although whites were loath to give them guns, those few that gained commissions fought in battles that changed the course of the war. The author shows the important roles that all blacks, not necessarily just slaves, played in the war. The slaves gambled their lives in escaping to join the British; recapture would bring horrific punishment. Smith’s long years of research and wide knowledge of this conflict has enabled him to focus on some of the remarkable stories of men and their families who fled to the English side. The British, fighting Napoleon at the same time, hoped to supplement their meager forces with slaves, who were promised freedom to serve as soldiers and valuable guides. Any slave who made it to British property was guaranteed freedom. Of 5,000 escaped slaves, only 500 became soldiers, but the records show they were fearless fighters and served in almost every theater of the war, from Canada and Michigan to the Chesapeake Bay. The author holds no great love for Andrew Jackson, who promised freedom and monetary and land rewards to slaves who joined the American forces—he had no intention of honoring that promise.

Smith illustrates clearly the plight of American slaves as they desperately struggled to gain their freedom and the lies, deception and deviousness their owners used to deny it.