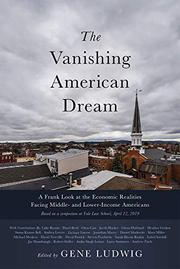 A work focuses on a symposium devoted to diagnosing and curing the socioeconomic ailments that plague the lower and middle classes in America.

According to Ludwig, the editor of this volume and the organizer of the discussions at Yale Law School it documents, the lower and middle classes in the United States are desperately falling behind. They are the victims of an “economic tsunami” ravaging them for some time, the effects thrown into grimly sharp relief by the recent pandemic, of which they are “bearing the brunt of the burden.” The crisis is sometimes obscured by an overemphasis on standard economic indices, like the gross domestic product, which fails to capture the heart of the problem. Stagnating and even declining wages and a dearth of employment opportunities as well as the rising costs of basic necessities like shelter, education, and health care have left many in the nation embattled. In spring 2019, Ludwig brought together an impressive assemblage of luminaries to discuss this issue, culled from academia, government, and the world of commerce, including Lawrence H. Summers, the economist, former secretary of the Treasury, and former president of Harvard; Deval Patrick—the former Massachusetts governor, who delivered the keynote address—and Sarah Bloom Raskin, the former deputy secretary of the Treasury. The discussion is subdivided into three panels that investigate the nature of the problem, the possible responses at the national level, and the possible strategies at the local level. The editor not only brings together an accomplished coterie of participants, but also a diverse one. The highlights often involve the principled disagreement among the speakers, exchanges that manage to be edifying, spirited, and unfailingly civil, no small feat in the currently overcharged political climate. Furthermore, the topics touched on are wide-ranging, including the impact of technology on inequality, the exclusivity of elite education, macroeconomic strategies for increasing employment, and the rise of White nationalism and populism. In this lively and engrossing work, Ludwig presents a model of public discourse—informed, multidisciplinary, and shorn of myopic ideological commitments.

An exhilarating record of intellectual engagement.