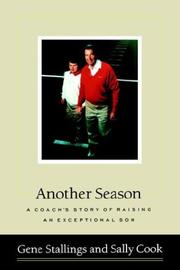 A Coach's Story of Raising an Exceptional Son

Famed football coach Stallings, aided by journalist Cook, combines a short history of his tough professional career with the affectionate story of his son, Johnny, who is burdened with Down's syndrome. In a simply told tale, Stallings, who carries the honorific ``Coach'' proudly, chronicles his accomplishments on the gridiron with great modesty. He has, clearly, more pride in the attainments of Johnny, who, now in his 30s, has come to his own kind of manhood with the innocence and sweetness that seem characteristic badges of Down's syndrome. More a homespun family memoir than a jock's saga, this volume neglects neither homage to Coach's hero and mentor, the fabled ``Bear'' Bryant, nor details of his own hirings and firings, from Texas A&M to the Cowboys and, finally, as heir to the ``Bear'' at the University of Alabama. Inevitably, the scoreboards told Coach Stallings's fortune. Known as ``Bebes'' to intimates, he yearned for a son, stalwart, smart, and strapping, maybe an all- star linebacker. ``A football coach needs a son who will play football,'' he would hear his wife say. Instead, they had three girls and Johnny, disabled and frail. Withal, Bebes and his wife came to terms with their melancholy and fears. The family and those close to them took Johnny to their hearts. With his winning personality, he became a favorite of his father's players and staff and, eventually, the fans. And Coach Bebes, seeking gridiron glory and often finding it, seems to have found something better through his exceptional son. It's an artless story, told quite prosaically. But while clearly deeply felt, it never quite catches fire. A nice book by a nice man, nothing more; but nothing less, either, and that should not be easily dismissed. (8 pages b&w photos, not seen) (TV and radio satellite tours)