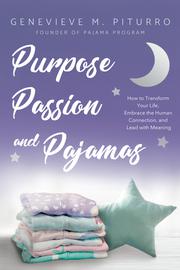 How To Transform Your Life, Embrace the Human Connection and Lead With Meaning

The inspirational behind-the-scenes story of a social service entrepreneur.

In many ways, Piturro’s debut memoir is emblematic of the American dream. Her father was an Italian immigrant, and her mother was the daughter of an Italian immigrant, and as an adult, the author worked part-time, attended college, and embarked on a successful career as a television marketing executive. Then one day, Piturro wondered if she was truly living the life she wanted, and it seemed to her that she had “missed something.” Although she had a warm relationship with her siblings’ kids, she had none of her own, and this led to “a growing need to connect with more children.” She began to read books to homeless kids at a local shelter, and this led her to her true calling. In this book, she traces the origins of the Pajama Program, a nonprofit organization she created two decades ago that provides books and pajamas to needy children through 63 volunteer-run chapters in the United States. It also provides similar services to youngsters in more than 25 other countries. Piturro straightforwardly reveals the trials and tribulations she faced while starting the nonprofit—including leaving her old career, investing thousands of dollars of her own money, and dealing with the resulting stress on her marriage. These personal sections are among the book’s strongest, as Piturro effectively shows how she rose above challenges and overcame obstacles with the help of others. In fact, she says that one of the biggest lessons she learned was that “the power of one doesn’t hold much weight. That’s because it’s really the power of one-ANOTHER that gets the job done.”

Piturro’s story unfolds chronologically, with wise observations about leadership interspersed throughout—axioms she calls “The Heart of the Matter.” These tips are always pithy and salient; for example, here’s how she explains her advice to “Put your money where your heart-voice is”: “When you spend money, time, energy, and resources on something that brings you joy, the price will feel small compared to what you get in return.” It’s easy to get caught up in the author’s emotions as she tells of the joy she’s brought to children by simply presenting them with new pajamas. Pajamas, in fact, are a recurring metaphor; at one point, for instance, she urges the reader to “Find your pajamas!” and suggests that “Your purpose can show up anywhere, anytime, at any age. It can change your career, your work relationships, your personal life, or all of it!” There are plenty of stirring anecdotes, and one particularly notable recollection describes Piturro’s 2007 appearance on The Oprah Winfrey Show, during which the celebrity host unveiled a wonderful surprise. Some readers may find Piturro’s prose style a bit too effusive at times, but her passion is undeniable, and she relates her life lessons with memorable imagery, as when she notes how the name “Pajama Program” came to her “like an invisible raindrop ‘plopped’ onto the top of my head.”