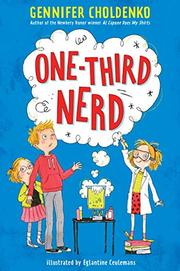 Best known for her Tales from Alcatraz series, Choldenko writes for a slightly younger set in this celebration of family ingenuity.

It’s hard enough that fifth-grader Liam’s parents divorced and now he, his two younger sisters, and their single mom live in an apartment in need of repair. Their beloved dog, Cupcake, won’t stop peeing on the rug, and the landlord has given them three weeks to get rid of the dog—or they’re all out. Episodic chapters balance depictions of the harsh realities of divorce and financial changes with amusing trial-and-error escapades as the siblings hatch moneymaking schemes to fund expensive vet tests. Along the way, the personality of each sibling shines through. Faced with more responsibility than other kids his age, Liam just wants to play tennis as well as Roger Federer—or at least to keep up with Moses, a new student who seems to have it all. Third-grader and total nerd Dakota is biding her time until she can cure cancer. Second-grader and avid hugger Izzy has Down syndrome, and her inclusion is not only seamless, but integral to the plot. Even when getting on each other’s nerves, they rally together when it matters most. Expressive black-line art depicts their lovable antics as well as members from their diverse community. Liam and his family are white; his best friend, Dodge, has brown skin and is likely of Latinx heritage, and Moses presents black, among other secondary characters of color.

Reminiscent of Judy Blume’s work, this endearing story will make many children laugh and allow some to see a part of themselves.