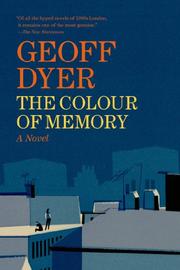 THE COLOUR OF MEMORY

Dyer, the prolific British essayist and novelist who now lives in the U.S. and won the National Book Critics Circle Award for Otherwise Known as the Human Condition (2011), published his first novel—an impressionistic, affectionate portrait of a group of 1980s British bohemians—in the U.K. in 1989.

A nameless narrator and five close friends in their mid-20s spend their days eating, drinking, smoking grass, talking and doing as little actual work as possible while living in the Brixton neighborhood of London. The narrator works dead-end marketing research jobs. Freddie, the narrator’s oldest and perhaps closest friend, is a would-be writer who seldom actually writes. Carlton obsesses about keeping his apartment clean. Steranko, whom the narrator envies and wishes he were more like, paints. When the narrator and Steranko both fall for beautiful Foomie, the narrator is not surprised that she chooses Steranko. Or that his own sister, Fran, and Steranko share an attraction. Sexual undercurrents run everywhere, but there is no sordidness and not much actual sex. Friendship is the important currency here. The narrator is a romantic, capturing images of his daily life in what he calls “an album of snaps.” He witnesses a stranger being beaten on the Tube but doesn’t step in; he meets a girl he’s attracted to, then remembers they met months before; he’s mugged but not hurt. He watches moments of random kindness and moments of cruelty. His friends have good and bad times. They discuss Nietzsche and listen to jazz. They live on the dole, getting stoned and wasted regularly. The narrator not only observes, but feels according to the situation: frequently boredom, occasionally fear, very occasionally exhilaration. This is less a plotted novel than a smudged valentine to young-adulthood friendships and the setting where they take place, 1980s Brixton, a slightly seedy, multiethnic district of London populated by immigrants and artistic types who live uneasily side by side.

Random sharp insights and images are studded inside this leisurely and oddly innocent chronicle of British Gen-X slackers.