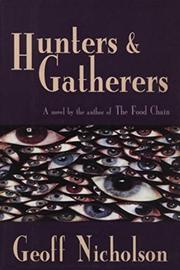 Attention fans of Evelyn Waugh, Douglas Adams, or any other clever, subversive British comedic writer: Add Geoff Nicholson to your must-read list. In this absurdly hilarious shaggy dog tale about collectors and collecting, the wickedly funny author of The Food Chain (1993) follows the misadventures of Steve Geddes, an unsuccessful London writer. When his well-employed wife finally tires of supporting him and boots him out, Steve tries to make some sense of his life by relocating to the dreary northern town of Sheffield. There he embarks on the cynical project of writing a book about people who are obsessive collectors. After dealing with the obvious cases, like hoarders of jelly molds and sports cars, he soon becomes involved with more covert collectors: people who amass lovers, knowledge, jokes, strange sounds, even imaginary beer cans. At the same time he must contend with a destructive anti-collector who threatens to ruin all of his subjects' accumulations. Then there is the mysterious door-to-door saleswoman whose 18-volume Books of Power is the strangest encyclopedia anyone has ever seen—except, of course, for Steve's friend Jim, who sets out to memorize every bizarre entry, each one a scatological jumble of random observations. And what are we supposed to make of Steve's favorite obscure writer, Thornton McCain, about whom, despite his disgust for collectors, he soon finds himself obsessing? Flying along a wild lattice of coincidences, Nicholson takes the reader into improbably funny territory. Just when you think he's spun out of control with too many different characters and plots, he brings it all together for a ridiculously inventive conclusion. On the surface a darkly hysterical romp, upon closer inspection a sly meditation on obsession, possession, and, finally, creativity. (Author tour)