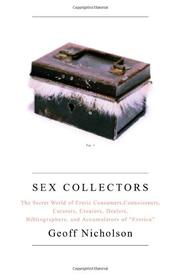 While it was obvious that his girlfriend Dian, a former pictorial editor for a men’s magazine, stockpiled sexual accoutrements, it took Nicholson some time to admit to having a sex collection of his own. In revealing the psychological origins behind collecting, the author ushers in a procession of eccentric accumulators of unique ephemera. While at ease touring some of the country’s most distinctive sex museums, Nicholson seems poignantly affected by the strangely bittersweet worlds of a 69-year-old Jewish widow whose erotically charged condo was recently opened to public viewing, and of Dixie Evans, 70, the outspoken curator of the Exotic World Museum of Burlesque, hidden away in the California desert. Items and conduct that seem deviant at first become commonplace throughout this read. Communications with a man who has his own homemade glory hole, the website of a fearless female exhibitionist and meet-and-greets with a rather nonchalant Catherine Millet, author of The Sexual Life of Catherine M., filmmaker Richard Kern and the compulsive manager of Third Eye Blind all result in humdrum outcomes, begging the question of whether it’s not the collectors and connoisseurs who are obsessed, but the voyeur. The strength here lies in the sex-centrics’ direct associations with their fetishistic behaviors. Nicholson scrutinizes more than a few specific items in delicious detail: Chinese lotus shoes, finger guards, plaster penis castings, graphic automata and the Holy Grail of possessions: the human foreskin. Though the author’s regular considerations of the historical relevance of his topic grow tiresome, his comprehensive, well-rendered approach puts an authentic spin on what could be trivialized as mere sideshow oddity. Nicholson failed to score an interview with Paul Reubens, but he gets points for an enchanting dinner date with the late sex-kitten Linda “Deep Throat” Lovelace.

Titillating, if a tad overheated. (15 black-and-white photos throughout)