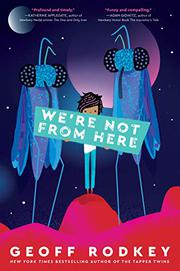 WE'RE NOT FROM HERE

Who knew the survival of the human race would depend on fitting in at school?

With Earth destroyed, humans have successfully petitioned Planet Choom to take them in as refugees. Narrator Lan Mifune and their family (Lan is never gendered in the text) travel there, arriving to a surprise. During the 20-year journey in bio-suspension asleep, Choom’s government has changed, along with their acceptance of humans, and they are asked to leave immediately. With no other alternative, Lan’s mom, Amora Persaud, who’s on the ship’s Governing Council, is able to negotiate a trial run, in which the Mifune family will prove humans can peacefully assimilate. Being the new kid at school is tough anywhere, but on Choom, Lan must navigate the cultures of the werewolflike Kriks; Ororos, who resemble giant marshmallows; and the Zhuri, who resemble giant mosquitoes and express emotions by secreting specific scents. Things get complicated when the Zhuri government executes a smear campaign against humans even as some privately believe humans can be peaceful if given the chance. It’s up to Lan and their family to prove humans can contribute to society. Rodkey deftly mirrors recent debates about refugees and immigrants, twisting them into a black comedy–sci-fi mashup. Racial and ethnic diversity is purposely shown solely through names, hinting via surname that Lan’s family shares mixed Japanese and Indian heritage. The abrupt resolution might leave some in disbelief, but that’s a small price to pay.

A quirky sci-fi adventure with a surprising layer of political irony.