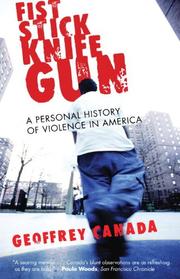 A Personal History of Violence in America

Canada, head of the Rheedlen Center for Children and Families in New York City, moves smoothly back and forth between recollections of his youth in a tough South Bronx neighborhood and ruminations on the changing nature of violence. His transformation from a shy, frightened kid into a street-smart young man who could hold his own in a fight is rendered in a wholly believable, step- by-step manner. The sections on his gradual indoctrination into a clique of hardscrabble young toughs are fascinating, as are the reasons Canada gives for the daily fights among his neighborhood friends: "It was the job of the older boys to 'make us tough' so we wouldn't become victims once we left the block.'' Canada sees an alarming difference between the street codes of his youth in the 1960s and those of today. Life has become increasingly cheap, he contends, due to a confluence of factors. Canada argues that the involvement of children in the drug trade can be directly linked to the tougher drug laws instituted by New York governor Nelson Rockefeller, which mandated stiff jail time for adult drug dealers. He also provides evidence that gun manufacturers have engaged in campaigns aimed at increasing gun use among children—a chilling example of capitalism at its most cynical. He offers some potential solutions, such as forming a peace officer corps and reducing violence on TV and in movies, and ends with a plea for aggressive action to ensure that America's cycle of violence will not be the only legacy we bequeath to our children.

A dose of strong medicine for a society locked into death on the installment plan.