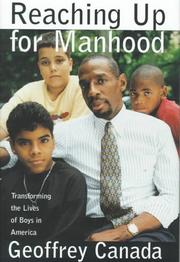 REACHING UP FOR MANHOOD

Transforming the Lives of Boys in America

A call to assist boys in their treacherous journey to adulthood rings briefly with truth. Canada (Fist Stick Knife Gun, 1995) obviously knows what he is talking about when it comes to young men in the inner city. Raised in the South Bronx, he is now president of the Rheedlen Centers for Children and Families, an organization employing and guiding urban kids, and ``father'' to four boys he thinks of as sons beyond his own son and stepson. But in this slender volume of home truths, he seems to squander the opportunity to really enlighten readers with his specific experience, opting instead for therapeutic homilies on often familiar themes. In chapters illustrating topics like ``Self-Worth,'' ``Sex,'' and ``Work,'' Canada compares parable-like stories of his own adolescence, suffused with hindsight, with vignettes in the lives of the boys he now helps. In their affectionately deadpan style, they almost become Bill Cosbyesque riffs on the foibles of adolescent boys and their bemused but sage dads. Except, of course, that too many of today's boys don't have the fathers around to be bemused or sage—a moral tacked on in pleas for adult participation in boys' lives, briefly formulated as what ``we as a society must do.'' None of his exhortations is by any means wrong, but given the forces of social fragmentation that have denuded these boys' lives to begin with, the questions of how in the world ``what must be done'' can be, and who the ``we'' to do it really will be, dwarf Canada's earnestness. The Rheedlen programs, to which he occasionally refers, seem to be an interesting example of some ``we'' in action, but we only get a passing glimpse. Useful, at most, as a very basic primer in the reality lived by today's boys; that such an elementary consciousness-raising may be needed, Canada can't be faulted for. (Author tour)