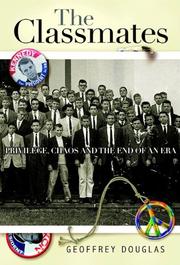 Privilege, Chaos, and the End of an Era

Sparked by a flurry of e-mails among former classmates during John Kerry’s run for president, Douglas (The Game of Their Lives, 1996, etc.) explores what happened to St. Paul’s class of 1962.

In the spring of 2004, the author watched in amazement as his inbox slowly filled with names he hadn’t contemplated in more than 40 years. They had all attended St. Paul’s and were fascinated by the presidential bid of fellow alum Kerry, who hadn’t been well liked at the elite boarding school in Concord, N.H., but earned their admiration during the run-up to the election. Douglas fondly recalls the frantic e-mail exchanges that eventually prompted him to meet with a few of his former classmates, including Kerry. He discovered that St. Paul’s alumni had endured a broad range of experiences since graduating, and he eloquently chronicles those experiences. The narrative frequently returns to Arthur, a class clown mercilessly ridiculed at school who suddenly died while the e-mail reunion was in full swing. The outpouring of grief following his death makes for one of the most touching moments in a book saturated with the emotions unleashed by a group of middle-aged men’s miraculous reconnection. Douglas describes meetings between himself and several other graduates, including Chad Floyd, a successful architect and Vietnam vet whose wife was crippled by depression, and Philip Heckscher, a Harlem high-school teacher who took a long time coming to terms with his homosexuality. Surprisingly, the passages about Kerry are among the book’s least interesting. The author admits that their interview was perfunctory, full of rote answers that the senator from Massachusetts has trotted out on numerous other occasions. But it matters little, because the reunion he inadvertently sparked opens a gateway for Douglas to muse on such larger concepts as identity, loss, expectation, failure and idealism.