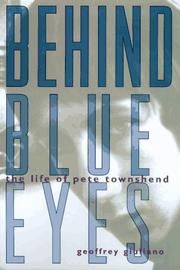 The Life of Pete Townshend

Riddled with inconsistencies, this overlong and occasionally self-serving biography of the Mod rock satyr offers little about its subject that fans don't already know. Founding member and driving force behind the Who, rock 'n' roll Boswell of his ``G-G-G-Generation,'' creator of Tommy (and of a new form of musical excess, the ``rock opera''), and possessor of one of the most prolific appetites (even by rocker standards) for booze, drugs, and the high life, Pete Townshend has long since cemented his legend as one of the giants of contemporary rock. Beginning with the Who's 1965 anthemic ``My Generation'' (remembered for its defiant refrain, ``Hope I die before I get old''), Townshend's career is perhaps best characterized by an uncompromising (some would say self-destructive) approach to both music and life. Giuliano (Blackbird: The Life and Times of Paul McCartney, 1991, etc.) has collected an extraordinary number of details about Townshend's profoundly dysfunctional childhood; his long-standing rivalry with fellow Who member, vocalist Roger Daltrey; his addiction to heroin; his search for religious meaning and his (occasionally bizarre) devotion to the silent Indian mystic Meher Baba; his erratic career after the Who stopped touring; his charitable work; his hearing loss; and the relatively recent revelation of his bisexuality. Less conspicuous, however, is the narrative focus that might make sense of all the facts. Giuliano seems at times flummoxed by his mercurial subject, who offers contradictory interpretations of his own work, including several different explanations for the ``Hope I die'' line. The author variously describes Townshend as an effete, middle-class artist and, seemingly without any recognition of the contradiction, as a gritty ``working-class rocker from West London.'' The book seems equally incapable of suggesting what influence Townshend's sexuality has had on his music or what it tells us about the pattern of his life. A confused, contradictory, and unrevealing work. (16 pages b&w photos, not seen)