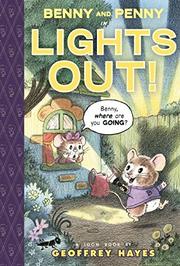 BENNY AND PENNY IN LIGHTS OUT

From the Benny and Penny series

It’s bedtime for the mouseling brother and sister—but not before plenty of horsing around and a deliciously scary expedition into the backyard.

As little Penny quietly tries to wash up and pretend-read a story (“One day the princess was sent to her room for being bratty. But she had a secret door…”), her restless big brother interrupts obnoxiously with warnings about the Boogey Mouse, loud belches and other distractions. When Benny realizes that he’s left his prized pirate hat in the backyard, though, Penny braves the Boogey Mouse to follow him out of the window and prod him into reclaiming it from the spooky, dark playhouse. She also “reads” him to sleep after the two race, giggling at their fright, back indoors. Framed in sequential panels that occasionally expand to full-page or double-spread scenes, the art features a pair of big-eared, bright-eyed mites (plus the occasional fictive dinosaur) in cozy domestic settings atmospherically illuminated by the glow of lamps, Benny’s flashlight and the moon. As in this popular series’ earlier episodes, dialogue in unobtrusive balloons furnishes the only text, but the action is easy to follow, and Hayes provides plenty of finely drawn visual cues to the characters’ feelings.

Another outing positively radiant with child appeal, featuring a pair of close siblings with complementary personalities.