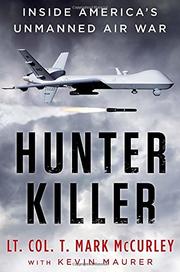 The Predator was McCurley’s craft of choice from 2003 through 2012, a drone (no longer so-called) once considered “an aviation backwater joke” and now regarded as the “spear in the war against terrorism.” Flying an RPA is much like flying an airplane, except that the controls might be located in a command center at Camp Lemonnier, in Djibouti, while the actual aircraft might be operating in Yemen and tracking prime terrorist target Anwar al-Awlaki, as was the case for this pilot in September 2011. McCurley, aka Squirrel (his tactical call sign), learned how to fly the Predator in 2003, at the Creech Air Force Base in Nevada. Without the traditional feel of an aircraft in flight, and with the pilot unable to use his senses to monitor its performance, the Predator is more difficult to fly than a regular plane, and the pilot has to stick to systems, data, and controls. Eventually, McCurley’s mission was to track terrorist convoys in Afghanistan and Iraq via the Predator and launch a missile attack. His account moves chronologically as he grew more confident as a mission commander and was assigned some high-profile targets—e.g., Iraqi leader al-Awlaki (mission accomplished). As this was the Predator’s period of coming-out, McCurley provides a valuable record of both the RPA’s effectiveness as well as the eerie, detached sensation the pilot feels when watching “the face of your enemy…staring back at you in high definition.” The author ably chronicles the tedious, routine work involving “days drenched in blood,” and he gives a good sense of the evolution of the RPA since the 1990s and the intensive human element necessary to command it.

An illuminating tale of a pilot on the cutting edge.

NO EASY DAY
by Mark Owen

EYES IN THE SKY
by Arthur Holland Michel
Nonfiction

THE FUTURE OF VIOLENCE
by Benjamin Wittes
Newsletter sign-up