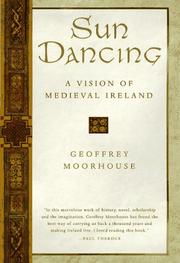 A Vision of Medieval Ireland

The rigors of Irish monasticism in the medieval period, well told by travel writer Moorhouse (On the Other Side, 1991; Hell's Foundations, 1992; etc.). The first half of the book is an imaginative reconstruction of life in an Irish monastery on the secluded rock-island of Skellig Michael from its founding in 588 to its dissolution in 1222. Moorhouse uses fictional vignettes to enliven the text. Each chapter is a well-chosen window onto a significant figure or event in the monastery's history—an 824 attack by Viking raiders, for example. In these fictional glimpses, we see the larger picture of Irish monasticism's evolution from a rigorously austere island faith to a less zealous, Romanized religion. Skellig Michael, perilously located on a sheer cliff rising from the ocean, began as one of the most ascetic of the Irish monasteries. Gradually, however, the population of monks began to dwindle, and the last fictionalized chapter shows the abbot and his aging disciples rowing their way back to the security of the mainland. The first half of the book is so intriguing and beautifully written that the second, a more traditional historical treatment of Irish monasticism, arranged topically, pales by comparison. Some of the discussions are absorbing, though; in one instance, Moorhouse explores the theme of syncretism, arguing that early Irish Catholicism, rather than eradicating pagan Celtic rituals, incorporated them into monastic life. This eclectic borrowing was able to continue for centuries because of Ireland's geographical remoteness from the centralizing forces of Rome. Due to accommodation with a Celtic spring ritual, Easter was dated differently than in Rome, a discrepancy that continued until Rome demanded conformity in the early 8th century. An uneven work, then, more fascinating in its first, fictionalized half than in the rigorous explications of the second, and one that might have worked better presented purely as a novel. (illustrations, not seen)