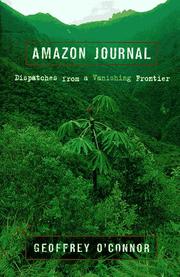  Portrait of a little-reported contemporary gold rush, awash in blood. O'Connor earned his chops as a filmmaker; his last documentary, At the Edge of Conquest, was nominated for an Oscar in 1993. He shows considerable talent as a writer as well, documenting the destruction of Brazilian Indian nations like the Kayapo and Yanomami as thousands of wildcat miners stream into their remote Amazonian territories seeking gold. (The Yanomami, he writes, ``refer to the miners as `wild pigs snorting in the mud' because of the way they press their bodies into the sides of rivers as they search the embankments.'') O'Connor's portraits of Indians, settlers, government officials, and environmental activists alike are right on the mark, and he writes with a certain offhandedness that verges on, but does not cross over to, smugness. He has a special fondness for needling the rock star Sting, who descends from the sky (helicopter-borne, that is) at points in the narrative to deliver homilies about saving the Garden of Eden and helping the Brazilian people solve their problems. Along the way, he dissects the myth of Chico Mendes, the Marxist labor activist, ``the world's first eco-martyr,'' and the Hollywood scouts who arrive to sign up hagiographic biographies; lampoons the commodification of Indian peoples; and even pokes fun at himself, an interloper in Indian country with camera and mosquito repellent in hand. Yet, acid-tongued as he is, O'Connor is utterly serious in his view that the gold rush is an unprecedented environmental and human disaster in the making, yet another threat to the embattled rainforest. And it is huge--the annual yield of the strike, he notes, is twice that of the much more famous 19th-century Klondike gold rush. A literate, unexpectedly funny, and ultimately alarming book. O'Connor's documentary of the same title will be released this year.

THE END OF THE RAINY SEASON
by Marian Lindberg
Nonfiction