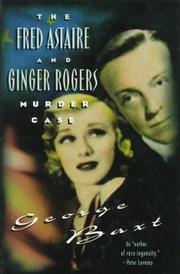 What better way to reunite America's favorite dancing couple in 1953 than in a ballet version of Rasputin and the Empress, danced with the USSR's famed Baronovitch Ballet? And what's more likely than that the CIA would be all over the company because it just might be honeycombed with, well, Reds? The stage is set for tension even before the news that half of the Baronovitch entourage is linked to the mysterious death of Stalinist advisor- turned-traitor Nikolai Vanoff. But instead of tension, Baxt provides fusty foreign intrigue, Sol Hurok's endless malapropisms, and more cameos than a wholesale jeweler. This 12th dip into the Hollywood pot (The William Powell and Myrna Loy Murder Case, 1996, etc.) turns up lots of poison (the cameos are particularly nasty) but little sustenance. Better take a cue from Astaire and stay on the sidelines.