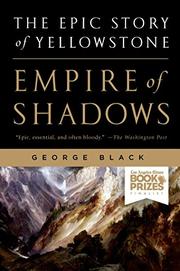 The Epic Story of Yellowstone

The story of a national park might seem a niche subject, but OnEarth magazine editor Black (Casting a Spell: The Bamboo Fly Rod and the American Pursuit of Perfection, 2006, etc.) surrounds it with a colorful, stormy, often-distressing history of our northern mountain states.

The author begins with Lewis and Clark, whose 1804–06 expedition passed nearby but brought back only rumors of odd geological events. The northern Rockies remained a backwater for another half-century. Almost no one but fur traders took an interest for the first 30 years; wagon trains pouring west after 1840 passed well to the south. By the 1850s gold mining and ranching produced settlers, quickly followed by the Army, both anxious to eliminate the Indians. Black provides painful details of 20 years of conflict that accomplished this goal. Lacking gold or good grazing, the Yellowstone area attracted few settlers, but visitors brought back tales of wondrous geysers, boiling springs and breathtaking scenery. In 1869 the small, privately funded Cook-Folsom-Peterson Expedition produced such a tantalizing report that Montana residents organized a large expedition. That expedition spent a month exploring, resulting in a torrent of publicity that led to the federally funded Hayden Geological Survey of 1871. Its enthusiastic report included historical photographs by William Henry Jackson and paintings by Thomas Moran, and the resulting publicity persuaded Congress to create the world’s first national park in 1872. Congress did not, however, provide money, so vandalism, poaching and commercial exploitation flourished until 1886 when the Army moved in. It did not leave until the new National Park Service took over in 1918.

An admirable, warts-and-all history of a milestone in environmental preservation.