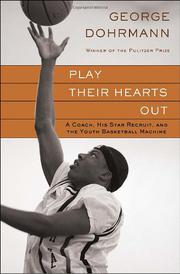 PLAY THEIR HEARTS OUT

A Coach, His Star Recruit, and the Youth Basketball Machine

In his debut, a Pulitzer Prize–winning journalist embeds himself in the sleazy underbelly of grassroots basketball.

Though Sports Illustrated senior writer Dohrmann is not the first to expose the seedy side of elite youth basketball leagues—a world in which middle schoolers are exploited by shoe companies and avaricious men intent on building fortunes without regard for the welfare of their charges—he is the most ambitious. Rather than profiling a single player, the author developed a relationship with an inexperienced, underqualified, but desperately determined young coach named Joe Keller and spent eight years chronicling his players’ struggles during their coach’s improbable rise from no-name youth coach to multimillionaire power broker. Before Keller, companies like Nike and Adidas fought over the most promising high-school prospects in the hopes of signing the next Kobe Bryant or LeBron James. Keller, however, set his sights on a previously taboo pool of players: still-developing nine- and ten-year olds. Despite his ambiguous morals, the coach displayed an impressive eye for talent, recruiting a team of young phenoms led by Demetrius Walker, who was soon ranked as the top player in his age group. Keller’s ascent within the grassroots community contrasts sharply with Walker’s struggles to live up to the hype generated by his power-hungry coach. Dohrmann’s account of Walker’s rise, fall and resurrection is more than a simple indictment of the grassroots system; it’s a warning shot across the bow of the basketball community to end the exploitation of good kids from difficult backgrounds whose opportunity to use their athletic gifts to forge a better life is stolen by morally bankrupt companies and shady middlemen. On the surface, it’s an easy story—unscrupulous white men making money off the sweat of undereducated urban youth—but in the author’s skilled hands, a potentially trite morality play becomes a powerful, nuanced chronicle populated with struggling parents, coaches both villainous and virtuous, and confused kids whose innocence is too readily exchanged for a long shot at glory before they understand the price.

A landmark achievement in basketball journalism.