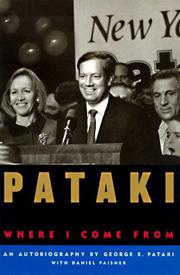 Where I Come From

Writing with Paisner (coauthor of books with former New York mayor Ed Koch and talk-show celebs Geraldo Rivera and Montel Williams), New York governor Pataki reminds New Yorkers why they should vote him in his as-yet-unannounced reelection bid and sends up a trial balloon for politicos wondering if he might become the next Republican wonder boy on the national scene. His is the classic second-generation-American-makes-good story. The Hungarian Patakis were poor farmers in Peekskill, NY; George worked hard on the farm; they didn’t have much, but they were rich in other ways, i.e., the important social and moral ways that ultimately enabled him to understand, say, how to reform welfare. The son of a mailman, George went to Yale and then Columbia Law School. He tried the large corporate law-firm scene but didn’t really have the stomach for it. Pataki turned to politics, where he served first as Peekskill’s mayor and then eventually as a state representative. Finally, after winning races that no one thought he could, he took on Democratic demigod Mario Cuomo and won. The book chronicles a little of that race but mostly focuses on Pataki’s roots, which he clumsily uses to enlighten readers about his Republican public policies. His summer stint on the coal cars at the nearby Fleischmann’s factory, for instance, enabled him, he says, to have “enormous respect for people who work in production and manufacturing.” That led to the theory that “we need enlightened employers who understand that the employees are part of a team, that they have an obligation to protect workers and an interest in helping them succeed.” A thinly veiled campaign tool that might be a useful history for political reporters, pundits, and politicians wondering what makes Pataki tick, but as interesting reading for the general public? Fuhgeddaboutit.