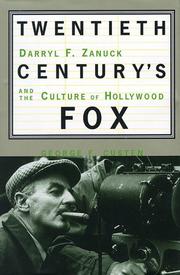 Darryl F. Zanuck and the Culture of Hollywood

An effective, in-depth evaluation of the life and work of the master movie mogul. One increasingly circulated variation on the auteur theory holds that certain remarkable producers, like Zanuck, have had a profound shaping influence on the movies they oversaw. But even in these terms, Zanuck enjoyed a remarkable, perhaps unique career. With close to 1,000 movies to his credit, he painstakingly crafted (working at an extraordinary level of detail) an unprecedented string of noteworthy—and usually successful—films, from All About Eve to The Grapes of Wrath and How Green Was My Valley. As Custen (Performing Arts/CUNY, Staten Island) notes, Zanuck ``would not give up the belief that although filmmaking was a collaborative enterprise, ultimately he and he alone possessed the judgment to successfully run the machinery of storytelling and to regulate the enterprise surrounding it.'' Zanuck was also responsible for any number of cinematic milestones. From the first major talkie, The Jazz Singer, to the first gangster movies, to Cinemascope, he had a sixth sense for surprising the public with its own unsuspected wants. As Custen demonstrates, Zanuck, an artiste among businessmen, was quite unlike any of the other men who ran studios. He came to Hollywood during the Silent Era, vaguely determined to be a writer. His real break came with his creation of the Rin Tin Tin series. From there he giddily ascended to the control of his own studio at the age of 31, a position he maintained until he was in his 50s, when in the fit of a middle-age crisis he moved to Europe and pursued a peripatetic and priapic existence, producing occasional movies as the mood took him. While Custen's story has great legs, his writing suffers from feet of clay—he can't resist constantly repeating himself. Nonetheless, a significant reappraisal of a major, often neglected, moviemaker. (16 pages b&w photos, not seen)